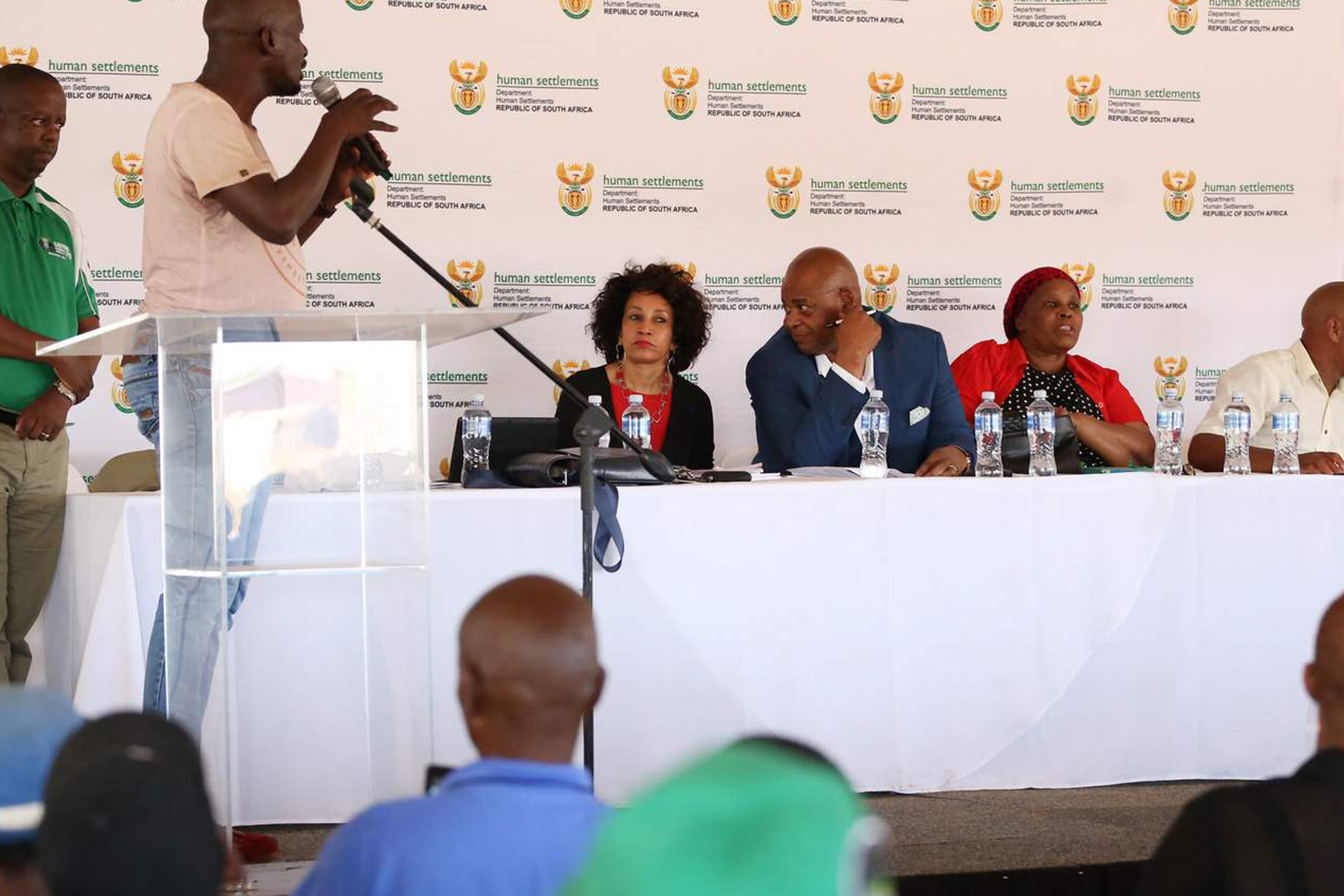 The community of Tshwane was overjoyed to see Minister of Human Settlements, Honourable Lindiwe Sisulu visiting human projects and interacting with community member on Friday 31 March 2017. The visits occurred in Nellmapius and Bronkhorstspruit within the jurisdiction of the City of Tshwane Metropolitan Municipality in Gauteng Province. The principal purpose was to engage with communities on grassroot level, listen to all challenges experienced within these two communities and formulate task teams which will work closely with communities in resolving the challenges and improving both lives and living standards of our communities. Further, the Minister’s visit formed part of oversight leadership engagements with local councillors and other community based organisations.

The first visit included a stakeholder meeting at Bronkhorstspruit Sports Centre, a walk about at Heatherly, Extension 22 where the Minister conducted door to door visits and then proceed to a community meeting at Skierlek, and Nellmapius Extension 24 where different beneficiaries from various informal settlements raised concerns directly with the minister. Nellmapius Ext 24 is one of the projects of which the HDA is the implementing agent. It is set to deliver 650 units housing units of which Phase 1 will be delivering 250 housing units, and most are at completion stage. The balance of the remainder for 400 housing units will for Phase 2 and is expected to be delivered in this current financial year. The minister gave a very pointed speech which was warmly welcomed by community members and the following points are of significance:

The Minister gave a very pointed speech which was warmly welcomed by community members. “Every project will result in the issuing of Title Deeds and we will also form Youth Brigades in the area” said Minister.

City of Tshwane has a mandate to reduce housing backlog within its jurisdiction and Nellmapius ext. 24 requires 2663 units to be constructed to accommodate the housing demand in the area. Therefore, Housing Development Agency has partnered together with the Gauteng Deparment of Human Settlement, City of Tshwane, local Councillors and Community at large to join forces in addressing the existing backlog. All houses are constructed in terms of Minimum Norms and Standards of the Department of Housing of Gauteng (GDHS) and are Quality Assured. The Housing Development Agency has appointed three Contractors to fast-tract the implementation process, which will contribute towards attainment of departmental goals and HDA’s strategic objectives. Other project in the include Nellmapius Extension 6, Mahube Valley Extension 2 and Temba View Ext. 1 which are expected to deliver more units in this current financial year.